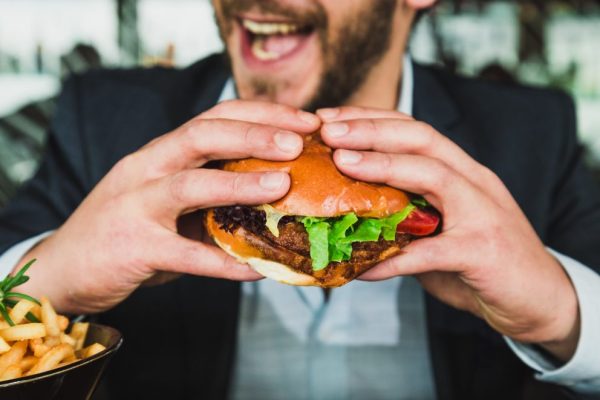 Even people not familiar with the countless ways cannabis can help the body are still familiar with the fact weed can give you the munchies. Why do you get hungry when you’re high? When you smoke or eat edibles you can often be struck by a hunger or a not-so-subtle hankering for your favorite snack foods.

Does cannabis just make food taste better? Do you get the munchies from THC? The munchies may be a deterrent for some because they don’t want to be mindlessly snacking. And yet, the munchies are one of the driving forces behind the first legal prescription version of synthesized THC known as Dronabinol (Marinol).

What exactly are the munchies? What’s the science behind the intense snacking and cravings you get when using cannabis? Is there a way to avoid it and is there a type of cannabis you can use that won’t give you a snack attack?

In this article, learn all about how cannabis interacts with and influences your hunger, how to handle it, and foods to avoid to keep you from binge eating while you’re high.

What Are The Munchies?

The “munchies” are the colloquial term for the changes in your hunger and taste responses that you get when consuming cannabis. It’s been said that, “Hunger is the best spice.” Similarly, cannabis can influence the parts of our brain and body that engage when our body is in starvation mode. This naturally makes food taste and smell better.

These shifts in the ways food tastes and smells is often why when people are high they suddenly have stronger cravings, are more susceptible to advertisements for food, and is the driving force behind the entire Harold & Kumar Go to White Castle franchise.

There’s also a more pleasurable experience when eating and the feeling like you can keep going which can take the munchies from a subtle hunger pang to the potential for binge eating. Let’s explore the science behind hunger and the munchies.

Photo by Sander Dalhuisen on Unsplash

Why Do You Get Hungry When You’re High?

To understand why we get hungry when high, let’s briefly explore the core system of the body that drives much of medical marijuana study. The endocannabinoid system (ECS) is a division of the central nervous system that can help upregulate and downregulate certain core body systems.

The ECS is made up of CB1 and CB2 receptors throughout the body that govern different body processes. Similar to nerve cells, these cells are engaged by chemicals in the body known as endogenous cannabinoids.

Like neurotransmitters and hormones, the body creates these chemicals, endocannabinoids, to essentially turn on or turn off certain processes including the regulation of appetite, food intake, and energy metabolism.

Cannabinoids like THC, CBD, CBG, and HHC are some of the hundreds of cannabinoids found in the cannabis plant that can naturally interact with our ECS. They can reduce inflammation, encourage relaxation, and, you guessed it, increase hunger.

THC engages with these endocannabinoid receptors which can mimic the body’s starvation state. This is why food can taste and smell better and encourage you to eat and eat. That’s why THC has been medically cleared for use for people struggling with nausea, loss of appetite, and weight loss due to chemotherapy, AIDS, or even eating disorders.

What Causes The Munchies?

There’s more to the science behind hunger than simply THC will make you hungry. To understand how cannabis gives us the munchies let’s review how the body naturally becomes hungry and full and what happens when cannabis is involved.

You may feel hunger when your stomach starts churning but the process all begins in the brain. It’s governed by a whole host of chemical signals in the nervous system and the ECS. Neurotransmitters and hormones signal to the body when it is sated and when it needs fuel.

When your body needs nourishment, it will release certain neurotransmitters including Neuropeptide Y (NPY) which is involved in the intake of food. Scientists have identified two chemicals that get released in the blood that communicate with NPY: ghrelin and leptin.

Low blood sugar levels can create a spike in ghrelin which encourages activity of NPY in the hypothalamus signaling hunger. It’s important to note that NPY has a preference for carbohydrate-rich food which explains why the munchies can have you running for chips or cakes.

When you’ve eaten, leptin levels increase which inhibits NPY and helps you feel full. The spike in blood sugar encourages the creation of leptin.

A study out of Bordeaux, France found that munchies all might be a matter of the nose. The study found THC engaged with endocannabinoid receptors in the olfactory bulb in mice. When exposed to THC, the mice could smell and taste more acutely.

They found that the process mirrors the endocannabinoids that are created when we are hungry. So while you get the munchies from THC it doesn’t create hunger. THC mirrors the body’s responses to that hunger.

In the same way your sense of smell can become more acute when you’re super hungry or food tastes better after you’ve fasted, THC mimics these body functions. This is often why it simply feels better to eat when you’re high.

Part of what drives the munchies is the blend of your increased sense of smell which increases your ability to taste foods blended with the enjoyment of eating.

THC also hinders the chemical signals of feeling full. Nerve cells in the hypothalamus called the hypothalamic proopiomelanocortin (POMC) neurons signal to the stomach that it’s full. THC can actually suppress the connection between these neurons and the brain which increases your chance of mindlessly eating while you have the munchies.

Photo by Tyler Nix on Unsplash

When Do The Munchies Kick In?

The munchies tend to kick in as your body has begun to absorb and process THC. With smoking it can be as little as 10 minutes whereas with edibles it can be anywhere from 1 to 3 hours.

Do Edibles Make You Hungry?

Again, THC is the main driving force for the munchies. You can often get more access to THC with edibles as there are more routes for it to enter your bloodstream: orally, in the stomach, and even in the intestines.

How To Avoid Munchies

Like with any attack of cravings it’s best to manage what is within your control. Plan ahead, keep yourself busy, and avoid temptation.

Consuming cannabis on a full stomach can help temper the munchies and make you less likely to overstuff yourself. Also, depending on what you eat, your meal may help augment your high. High-fat meals can give your body more accessible fats to aid in the absorption of THC.

It’s also best to keep yourself ready with healthy snacks rather than the type you may binge on and overdo. Keeping those snacks out of your sight and avoiding stopping near trigger spots or watching tantalizing ads can help you keep the munchies from getting the best of you.

The munchies can often augment the experience of eating. Consider healthy snacks with similar textures, mouth feel, or flavor. For example, there are healthy alternatives to chips like crunchy veggies or crackers. You can also replace sweets with fruits. Also, since you’re enjoying eating, maybe use the munchies as a chance to eat things you normally avoid like healthy veggies.

Planning an activity beforehand can decrease your chances of unnecessary eating. For example, you can consume cannabis before a walk or even before working out. Keeping busy will keep you from mindlessly snacking.

Staying hydrated is also key. Cannabis use can cause you to become thirsty and mild dehydration can often mimic hunger. Remaining thoroughly hydrated can help you from feeling too hungry.

How To Stop The Munchies

Can the munchies be stopped or avoided altogether? It can be challenging as munchies are pretty much the norm for cannabis use. After all, if THC is often the main appeal of using marijuana and it causes the munchies it’s hard to avoid.

Are there strains that won’t make you hungry?

Weed That Won’t Make You Hungry

One cannabinoid that can help counteract THC is CBD. CBD can often be like the anti-THC. It can counteract or temper many of the effects of THC. It’s even being considered as a treatment for obesity.

CBD is becoming popular for its anti-inflammatory properties. If you want to avoid the munchies try a high CBD strain or have CBD edible before you consume cannabis. There are strains and edibles available that have both THC and a high-concentration of CBD.

THCV(Delta 9-Tetrahydrocannabivarin) is a newly discovered cannabinoid that suppresses the appetite. This may be a cannabinoid to seek out if you’re trying to avoid the munchies.

Foods Not To Eat When High

Are there foods that can actually increase your chances of getting the munchies? There are a few different foods and substances to avoid at risk of taking your munchies to the next level.

High-fat foods will increase the available lipids for THC to bond to. Having a high-fat meal or snack before or after consuming cannabis can increase the amount of THC your body absorbs. This can potentially increase your chances of getting high but also the munchies.

Alcohol not only increases the amount of THC in your blood but it has been known to also give people a hankering for snacks. If you want to avoid the munchies you may want to skip that beer or cocktail when getting high.

Gluten is a hot topic but it can make you more likely to want to eat processed foods like cookies, cake, pizza, and soft drinks. A study in the American Journal of Clinical Nutrition found people who consume gluten eat an average of 400 more calories per day.

Gluten is also known for drug-like neurological effects. Dr. William Davis asserts, in his book Wheat Belly, gluten can create morphine-like compounds during digestion which can not only stimulate the appetite but also create addictive behavior.

Even if you do not have a gluten issue you may want to avoid high-gluten foods that may affect your blood sugar levels which is also connected to the munchies.

The munchies are par for the course with marijuana use. It’s a natural part of how your body metabolizes THC and it will increase the hormones in your body that make you hungry. The bright side is it also makes food smell better, taste better, and creates a more enjoyable dining experience.

While somewhat unavoidable, there are steps you can take to avoid letting the munchies get the best of you. Whether it’s being prepared with healthy snacks or avoiding foods that supercharge your snack cravings, a little prep goes a long way. There are even strains of cannabis or combinations that are less likely to give you intense cravings.

This article has been reviewed by Dr. Anand Dugar, an anesthesiologist, pain medicine physician and the founder of Green Health Docs. Graduating from medical school in 2004 and residency in 2008, Dr. Dugar has been a licensed physician for almost 20 years and has been leading the push for medical cannabis nationwide.

The post What are the Munchies? And How to Stop the Munchies When You Get Them appeared first on Green Health Docs.

How to Stop the Munchies After Getting High

High Eyes: What Causes Red Eyes & How to Get Rid of Stoned Eyes Fast

What Are Adaptogens—and How Are They Useful to Us?

What Is Considered High-THC Cannabis?

4 Methods to Clean Your Glass Pipe to Perfection