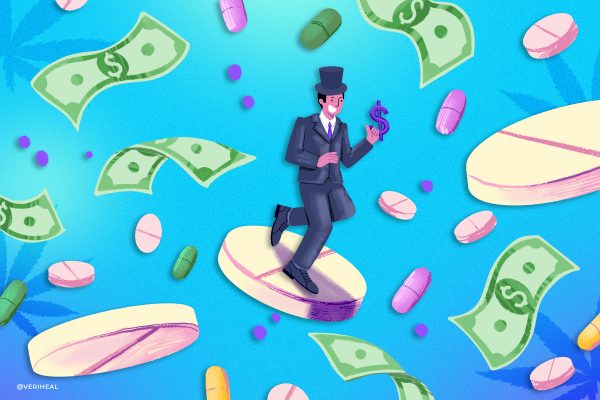 Cannabis has been proven to offer a plethora of benefits medically. Hemp—which was just federally legalized in 2018—has immense potential as a material that rivals paper, plastic, and even cotton, which all have produced detrimental environmental harm over the years due to their manufacturing. It definitely makes you wonder: If cannabis prohibition had never happened, would we still be facing a lot of the issues that we are today?

Aside from Anslinger, there is another individual that had a monumental impact on modern medicine as well as caused detrimental harm to our environment. While you may have heard of this individual, it’s likely that you know him not for these things—but for his work in the oil industry.

The individual I am referring to is none other than John D. Rockefeller. Rockefeller is known as the richest man in modern history. It is estimated that he was worth an estimated $300 to $400 billion dollars at the time of his passing in 1937.

His fortune was made over the years through various ventures, and by the turn of the 20th century, he had a hand in over 90% of oil refineries in the U.S. This control in the petroleum industry gave him the perfect angle for catering to the curiosity of scientists at the time who were investigating the use of petrochemicals to produce synthetic vitamins as well as a wide variety of products that could be made utilizing these compounds.

Keep in mind that this is a time in our history prior to many modern medical advancements in which many people in cultures around the globe, including in the United States, utilized herbal medicine and other holistic therapies like homeopathy, naturopathy, chiropractic therapies, and essential oils to address medical ailments.

It wouldn’t be long, though, before this would be changed due to the influence of a petroleum oil tycoon. Along with the help of the Carnegie Foundation for the Advancement of Teaching in New York City, the Rockefeller Foundation helped to fund a report known as the Flexner Report of 1910. This report was authored by Abraham Flexner and ultimately labeled natural healing therapies such as those listed above as “unscientific quackery” and led to the removal of their teaching from many modern medical schools.

After recommendations from the Flexner Report of 1910 were implemented, the American Medical Association became the only entity in the United States that was licensed to approve medical schools in America. Coincidentally, many of these schools were funded through grants made possible by the Rockefeller Foundation, which were provided under the stipulation that the schools could not include any teaching of natural remedies within their curriculums.

The Era of Petroleum-Based Products

With his foot in the medical sector, Rockefeller also went on to fund and establish the American Cancer Society in 1913. This gave him the in that he needed in order to take control of the petrochemical market as well.

Today, petrochemicals are used to manufacture a wide variety of products ranging from topical salves, ointments, and creams to antibacterial products, rectal suppositories, cough syrups, lubricants, antibiotics, and much more. The use of and manufacturing of these products, as well as their disposal, present many dangers to not only human health but also the environment.

The Environmental and Health Risks of Petrochemicals

Many petroleum-derived products make their way into waterways that are unable to be purified and end up aggravating the water with tainted compounds. Not only do petroleum-derived products pollute the water, but they also pollute the air, as their manufacturing causes the release of greenhouse gases into the atmosphere resulting in acid rain, smog, pollution, and other environmental issues.

Some of the adverse effects of exposure to petrochemicals and the toxins in which they contain via topical use or inhalation include but are not limited to infertility, depression, birth defects, hay fever, allergies, intractable diseases, and degenerative diseases such as cancer to name a few.

Ingredients to Avoid in Skincare Products

If you are looking to avoid the use of petrochemicals in topical skin care products, you will want to avoid anything that includes parabens, benzene, synthetic dyes or fragrances, silicones, synthetic emulsifiers, or ingredients labeled as PEG, DEA, TEA, or MEA.

These petrochemical-based ingredients and toxins have been known to be human carcinogens, and many have been linked directly to skin cancer as well as the disruption of the endocrine system. Unfortunately, even knowing the risks, many product manufacturers choose to ignore the research and continue to include these harmful ingredients in their products—many of which are household names and used by millions on a daily basis.

As you can see, there are a lot of similarities between the influence that Anslinger and Rockefeller had on modern society. Unfortunately, many of the detrimental effects that their actions have resulted in cannot be reversed or will take much time and dedication by future generations.

Luckily today, in the age of information, people are once again becoming more aware of what nature has to offer in many aspects. We as a society are also becoming more knowledgeable regarding the lies, greed, and, unfortunately, racism that has fueled such detrimental changes in society through the years. When it comes to the aspects of nature that have been stigmatized and kept from the people they could have benefitted, cannabis is only the beginning.

Top Strains That Help the Symptoms of Leukemia

Notice of Intent to Accept Applications for Cannabis Consumption Lounges

Performance Curves: the Conditions That Matter Most for Your Grow

How to Open a Dispensary in New York 2022